The new trend in television is for every cable channel to have an app. They used to see it as a nice thing to have, but over the last year many have realized that it's critical t their survival. Disney launched Disney+, NBC rolled out Peacock, HBO evolved into HBO Max, and CBS will soon transform into Paramount+.

Another channel I remember from way back, when I actually had cable, is Discovery, which launched discovery+ in early January. As a brand new app launching into an already crowded market, discovery+ needs to implement good ASO right out of the gate. Let's see how it's doing.

Overall, discovery+ earns a B-, and a confused emoji 😐 because it seems they ignored the basics 🤷🏻‍♂️

Not so good: Minimal keyword optimization, screenshots that expect the viewer to already love Discovery, and a yada-yada-yada approach to highlighting their uniqueness.

discovery+ by the Numbers

Here's how Discovery+ is performing in the U.S. App Store, based on our App Intelligence:

discovery+ launched a little over a month ago. Let's see what the downloads trend looks like. 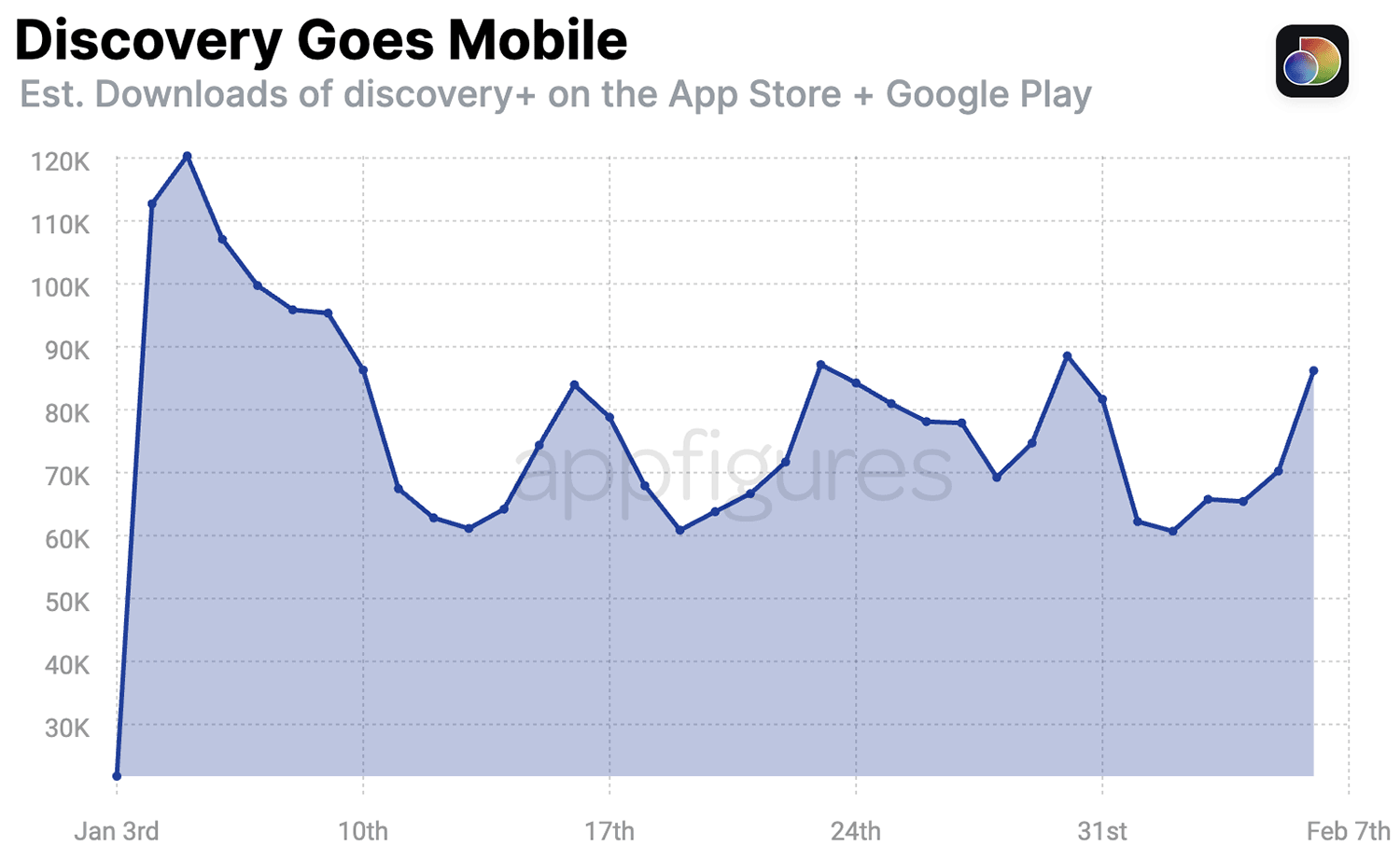 We estimate discovery+ was downloaded a little more than 974K times in the U.S. App Store so far, and more than 1.7M times on Google Play, which isn't bad at all considering it launched right into uncertainty and doesn't do news.

Discovery+ vs. the Competition

The streaming market isn't what it was a year ago when Quibi was launching. Today, cable channels and content owners alike are putting more effort into their mobile presence.

As you can see, discovery+ is doing pretty well for itself so far, and in case you're wondering, these numbers don't include launch week, which is that spike you saw above.

This leads me to believe there's demand for the kind of content discovery+ streams. A great muscle to flex on the App Store.

I suspect most of these downloads are a result of heavy advertising and not organic downloads. But that gives discovery+ a very strong starting point with ASO that could become a springboard for organic downloads when used properly.

Not bad for the first month, which indicates discovery+ has content viewers want to consume. 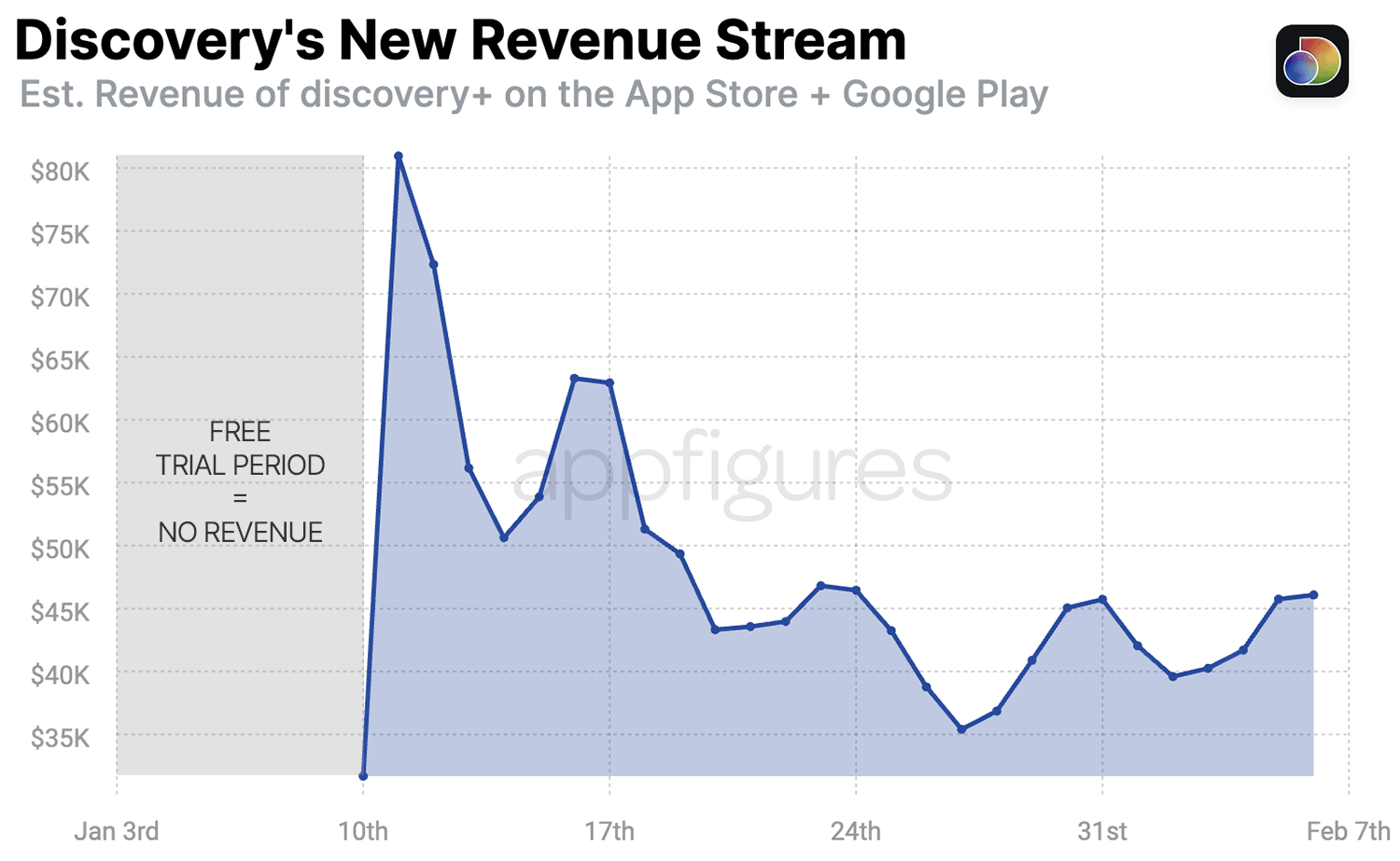 For comparison, NBC's Peacock earned just $164K in its first month last year, according to our estimates.

Let's kick off the analysis with the keywords Discovery+ is using in its name and subtitle. Those send the strongest signals to the App Store's algorithm.

"Stream TV Shows" is perfect, but without any support from the subtitle, that's really all there is for the algorithm to see. And yes, that's a missed opportunity.

Ranking well, without support from the subtitle, isn't easy.

Some brand marketers love grandiose vague statements because they insinuate what they sell is big, and that's good, right?

"Stream what you love" isn't actionable. Does discovery+ really give everyone what they love? Not really. So even if this vague statement did lure a user over, they could be in for a disappointment.

Back in ASO land, repeating "stream" also wastes six whole characters, which is an even bigger sin!

I didn't expect too much after seeing the subtitle, but this list isn't that bad. It doesn't mention competitors, which is a good starting point and makes good use of characters by mentioning some of the content included (food network) and also activities related to their shows (cooking).

This is, in my experience, one of the best ways to use the keyword list. If... those keywords combine well with the name and subtitle. In this case, there isn't too much to combine with, but that's a fairly easy fix.

Where Else is Discovery+ Ranking?

This combo of name, subtitle, and keyword list gives Discovery+ a bit more than just the name and subtitle alone. Here are some of the highlights:

Although discovery+ has nearly a million downloads, it isn't ranked in that many keywords. This is a direct result of its young age, but much more than that, it's the name/subtitle combination.

When filtered to show keywords with a rank higher than 20 and some popularity, we see a list that's very similar to the list we looked at above, of only the keywords the app is directly optimizing for, meaning the algorithm doesn't have enough to go off of to put the app into other searches.

That's what happens when you don't give the algorithm enough variety.

Tip: If you're launching a new app and want to give the algorithm more variety, come up with three different sets of name, subtitle, and keyword list. Then, use the first when launching, and replace with the second 2-3 weeks after launch, and then again 2-3 week after that.

Glancing over these, I can easily tell I'm looking at an old school cable TV. That's not necessarily a bad thing.

No video. No surprise.

I know Apple is strict about what's in the video, which discourages many companies from actually utilizing videos. But I doubt Discovery actually experimented with a video before deciding not to have one.

No one else is doing it, which is mostly true, which means that's an opportunity, the way I see it.

The Verdict: Too Traditional

I've seen many big brands make the mistake of seeing the App Store as just another channel for their content and not optimizing for it properly early on. Most eventually figure it out and do something about it, which is what I expect to see happen to discovery+ as the initial wave of downloads slows down and the ad budgets start to show lower ROI.

If you've been putting off optimizing your app, whether for lack of time or lack of knowledge, remember that it's better to start small than not start at all.