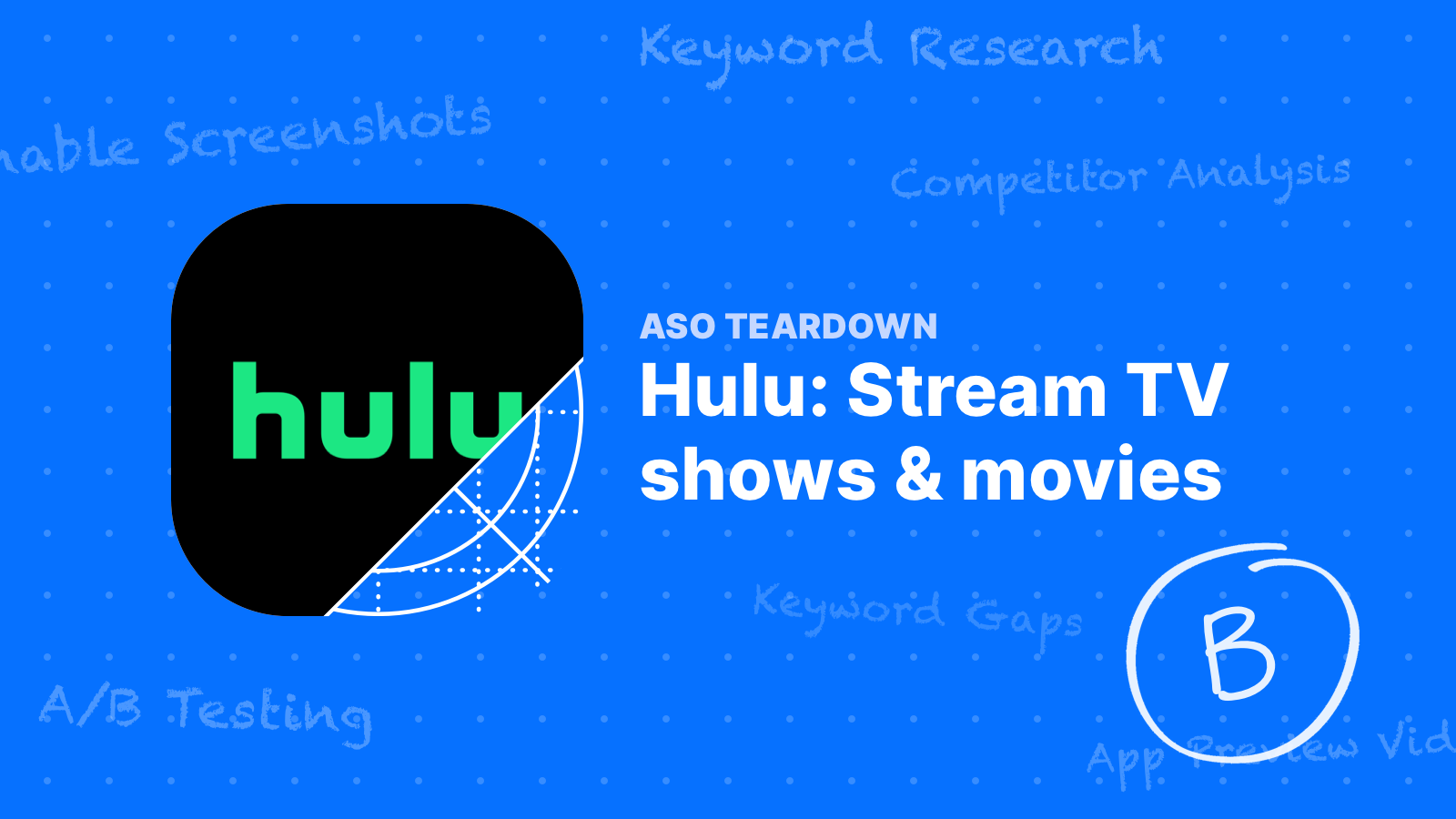 Welcome to ASO Teardowns, a series where we dissect the strategies apps use to gain visibility on the App Store and Google Play for you to learn from.

Are you also spending time in front of the TV these days? If so, you must have tried Hulu. Between live TV, a nice catalog of movies, and originals, Hulu means entertainment. Yes, Hulu's brand name is heavily promoted outside of the App Store, but like other popular brands, it must compete just like the rest for rank positions.

We'll look at what they're doing right and what can be improved in this ASO teardown.

Overall, Hulu gets a B

Hulu by the Numbers

Before we start examining, here's how Hulu is doing in the U.S. App Store:

Hulu vs. the Competition

Streaming is a huge industry in the U.S., especially now, with much of the population spending every day at home. While Netflix is one of the most popular names associated with streaming (and chilling), Hulu is right behind it

Here's how the top streaming services perform in the U.S. App Store:

Hulu's right behind category leader Netflix, and ahead of Disney+ and Amazon Prime Video. The audience for all four is fairly similar in demographics, but looking at the table above, it's evident who's getting the downloads and converting them into paying subscribers best. Hint: it's not Amazon.

Now, let's look at the key components of ASO: keywords, to get found and send more people to the app's page, and visuals, to convert those people into users (aka. downloads).

For iOS apps, there are three areas Apple looks at for keywords: the app's name, subtitle, and keyword list. The first two are public, so we'll start by analyzing those:

Personal pet peeve: Names aren't sentences and, as such, look much nicer when capitalized like a title. But that's just me...

Strictly based on these, these are the keywords Hulu is targeting:

Hulu is clearly focused on "stream" and "watch." Let's see how that's working out for them: 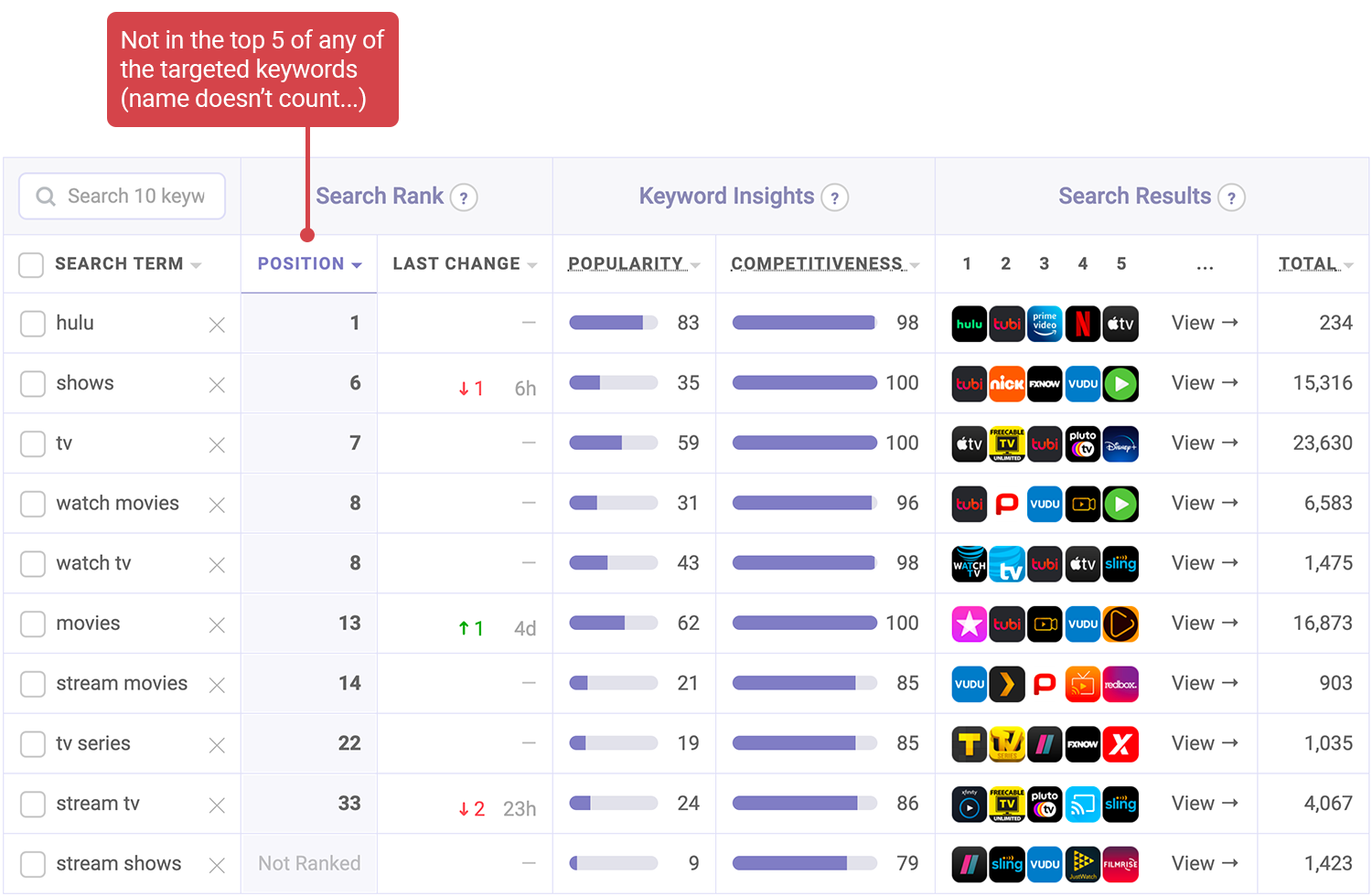 Not great. Hulu ranks in the top 5 for only one of these keywords—its own name. It manages to stay in the top 10 for the more popular, but that's less than ideal. Considering most competitors have fewer downloads, why is Hulu not ranking better for its keywords?

When competing against strong apps having the name and subtitle play together with the keyword list is a must, and in this case, that's probably not happening right.

Keep in mind, Hulu spends a lot on promotion outside of the App Store, where most of its downloads originate. But downloads without the right keyword strategy just aren't enough to get good search results.

Beyond those targeted ones, the app is ranked in a few other keywords, but for the most part, they aren't very relevant. 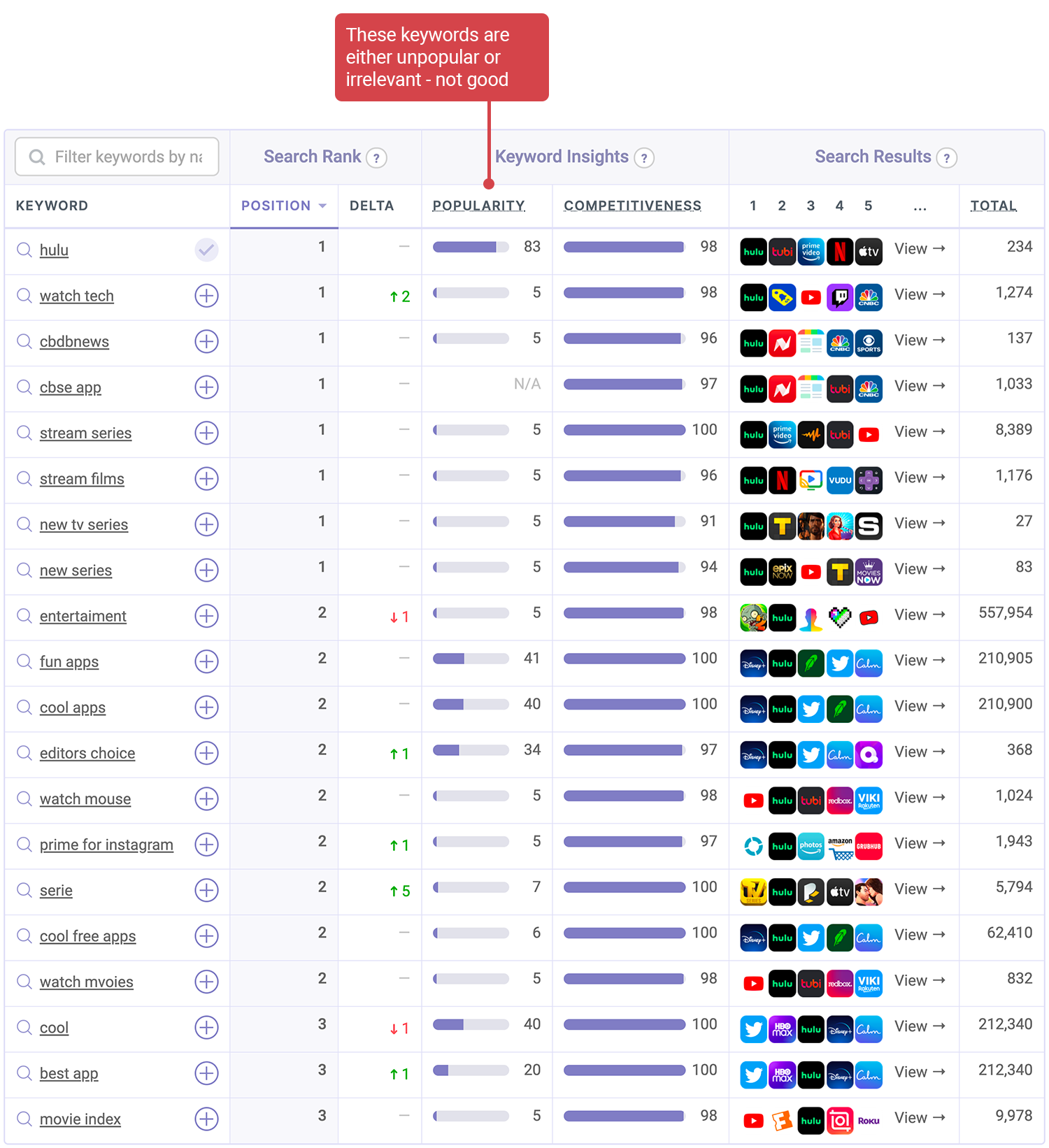 The keyword list is private and can only be seen by the developer and Apple's search algorithm, so we're going to have to reverse-engineer it. Based on keywords the app ranks in that aren't already in the name and subtitle, we believe it looks something like the following:

Hulu's keyword list, according to our method, is stuffed with competitor names. This is really two mistakes in one:

I've said it before, and I'll say it again, targeting competitors in your keyword list is a lose-lose strategy. Don't do it unless you know exactly what you're doing. 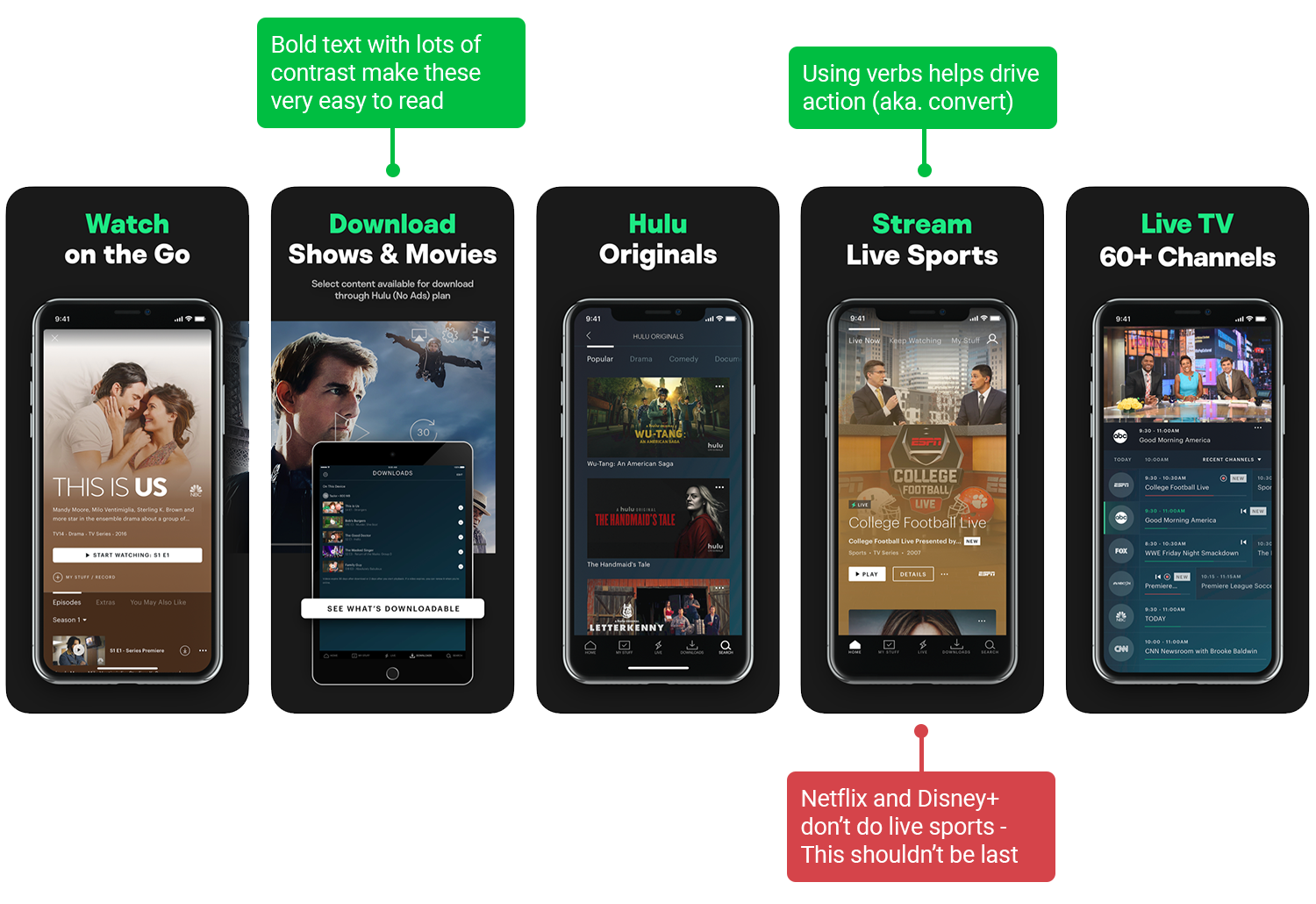 Hulu's screenshots check all the boxes when it comes to design. They are actionable, clear, and highlight Hulu's advantages. This is an excellent set to learn from, much like that of Duolingo. But there are a few ways these can be optimized even further.

Hulu's live TV and sports are its competitive advantages. As such, moving those screenshots up could increase conversion. At the same time, "on the go" is no longer all that exciting. Right now, that's the first screenshot. Pushing it towards the end, or removing it altogether, could also increase conversion.

Hulu doesn't have an App Preview video. With Apple allowing more apps to get away with promotional videos and not just pure UI, not having a video is a missed opportunity to showcase what makes Hulu unique quickly.

Hulu's ASO is focused, and on the surface seems fine. If we didn't look for results, we'd say it's a great example of how it should be done. But... focus, on its own, isn't enough. You need to have the right focus, and to follow it through across all of your metadata.

Also, Hulu isn't showcasing its best features, which is making it hard to compete with the likes of Netflix and Disney+. Always play to your strengths.

Are You Also Making These Mistakes?

How's your ASO strategy performing? The key to success with ASO is to constantly make changes, and base those on data. Appfigures has all the tools you need to find and evaluate keywords, track performance, and monitor the competition. Get started