📈 February's dip continues into March, and a slight downward trend can be seen across almost every category on both platforms.

A new name reached the top of the App Store this week - MyHeritage.

The family tree building app isn't new to the store, but this week it released an update that lets users animate pictures of their ancestors. 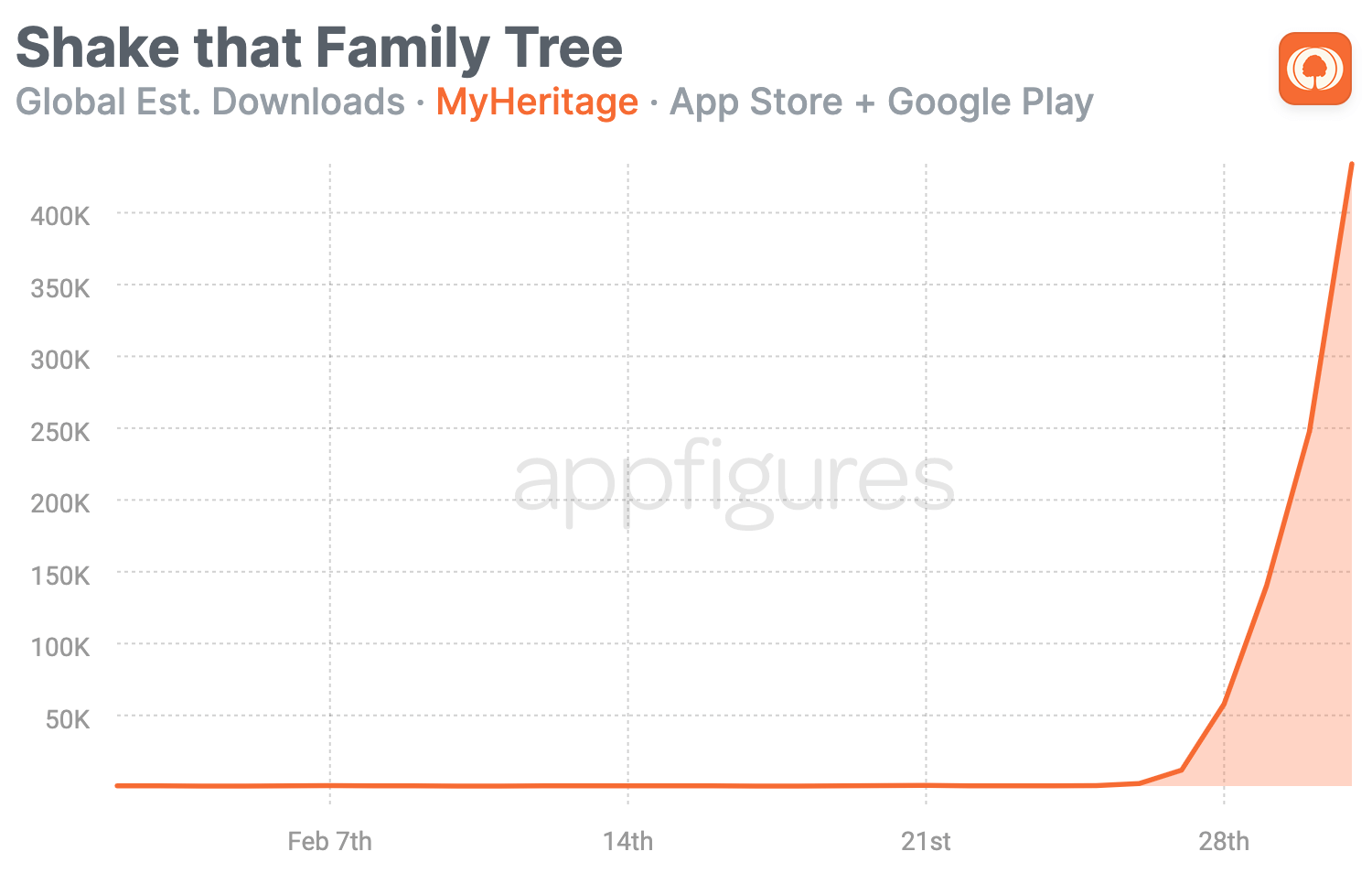 Looking at our estimates, downloads exploded after the release, going from just under a thousand per day on average to over 430K this Wednesday. Between when the spike started on Sunday and Wednesday, MyHeritage added more than 880K new downloads across the App Store and Google Play.

Tom & Jerry, a new movie about the duos origin story, debuted last week. And as is (now) customary, it was released to HBO Max and in theaters last weekend. The lockdown-era hybrid release seems to be working very well. 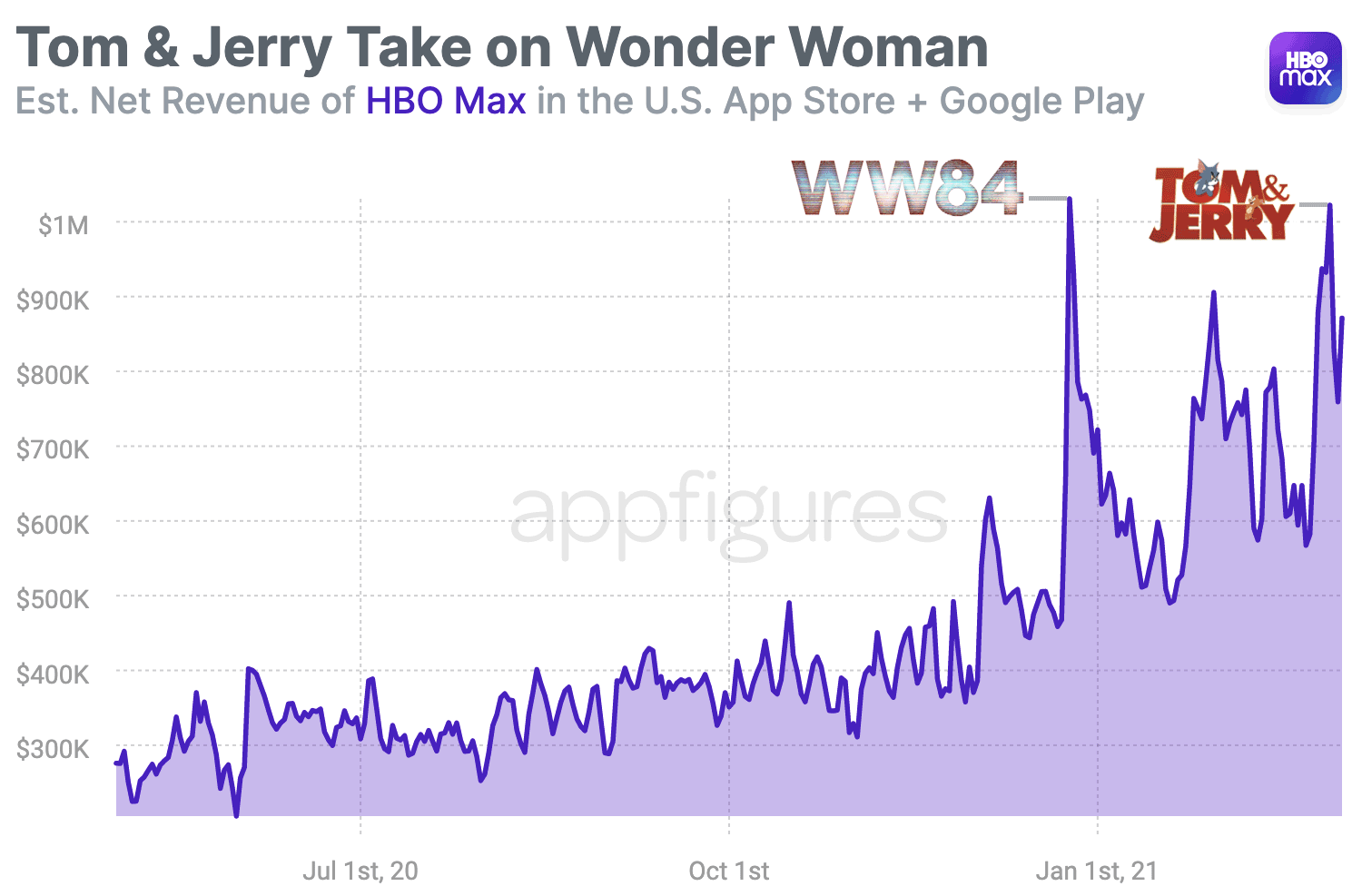 Max has been doing very well on mobile, as we saw last week, but this release managed to do even more than I expected.

Looking at revenue estimates from the App Store and Google Play, new subscriptions for Tom & Jerry were almost on par with those of Wonder Woman back in December, the biggest increase in revenue for HBO.

We estimate net (after the stores take their fee) revenue of $1.02M, a few thousand shy of WW84's $1.03M. This will inevitably make March the top-grossing month for the almost-year-old brand.

3. The heavyweight of sport streaming

Sports = big downloads. That we already established a few times this year. The app I saw climbing the top grossing chart this week, however, is new to me.

DAZN is a sports streaming app that was started by former ESPN CEO and is focused on boxing. In addition to streaming matches, it also has its own exclusives. Last week's exclusive fight between Canelo Alvarez and Avni Yildirim gave it a record day of revenue. 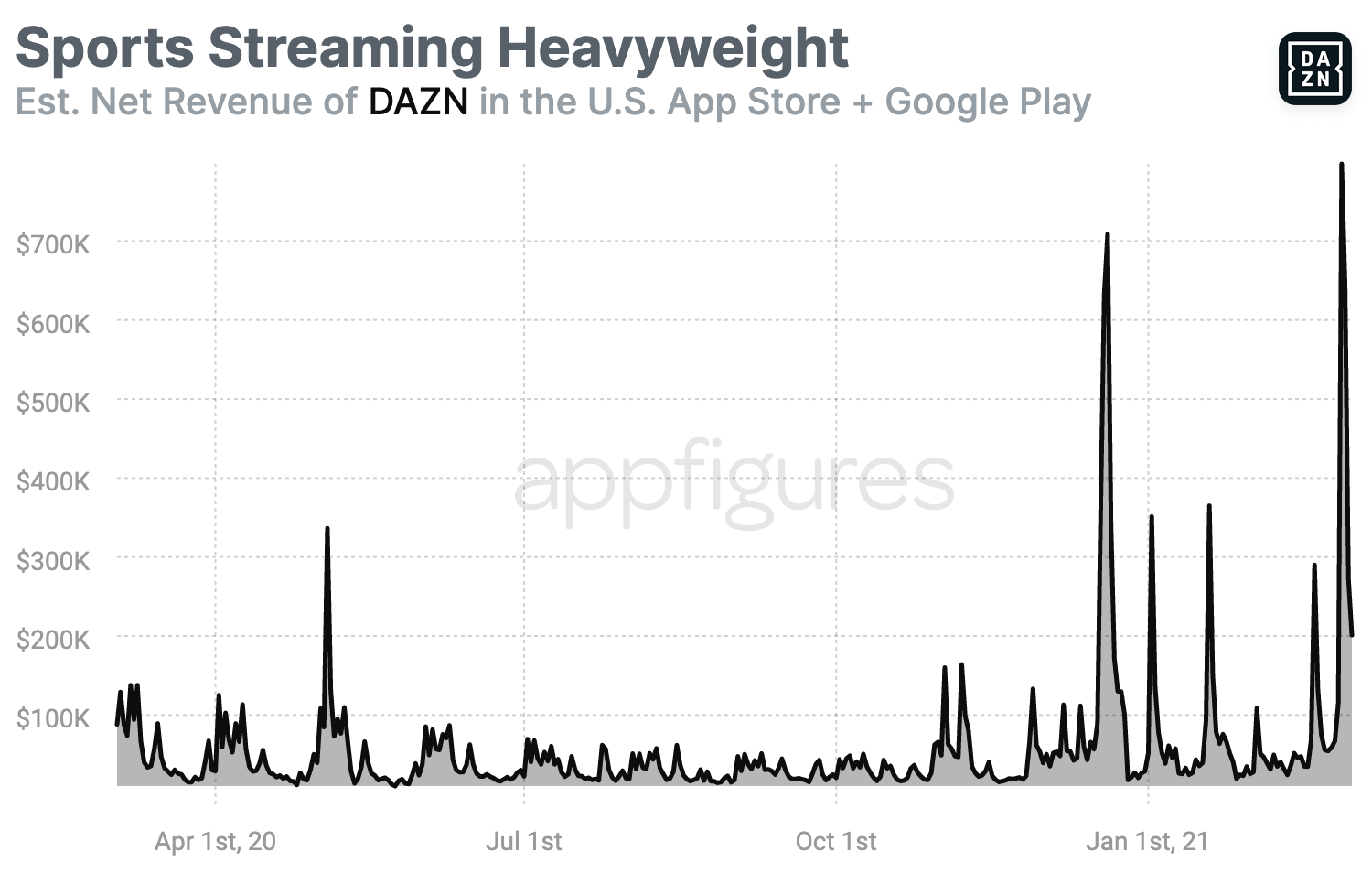 Daily net revenue in the U.S. averaged about $40K over the last year, according to our estimates. Last Saturday, the day of the big fight, U.S. net revenue rose to $798K, nearly 20x.

Exclusive content is nothing new in the entertainment world, but since streaming took over, it was a bit forgotten for most. As streaming matures, however, we're starting to see those same patterns return.

When Apple announced privacy labels last summer, we knew this would spell trouble for data-heavy companies like Google, whose thirst for behavioral data knows very little end, so it wasn't a surprise that when Apple made the labels required to release updates, Google stopped releasing updates.

That all changed this week as Google finally started labeling their apps. Here's a look at Google's entire portfolio. Highlighted icons are ones that now state which information they collect. The rest don't, yet. 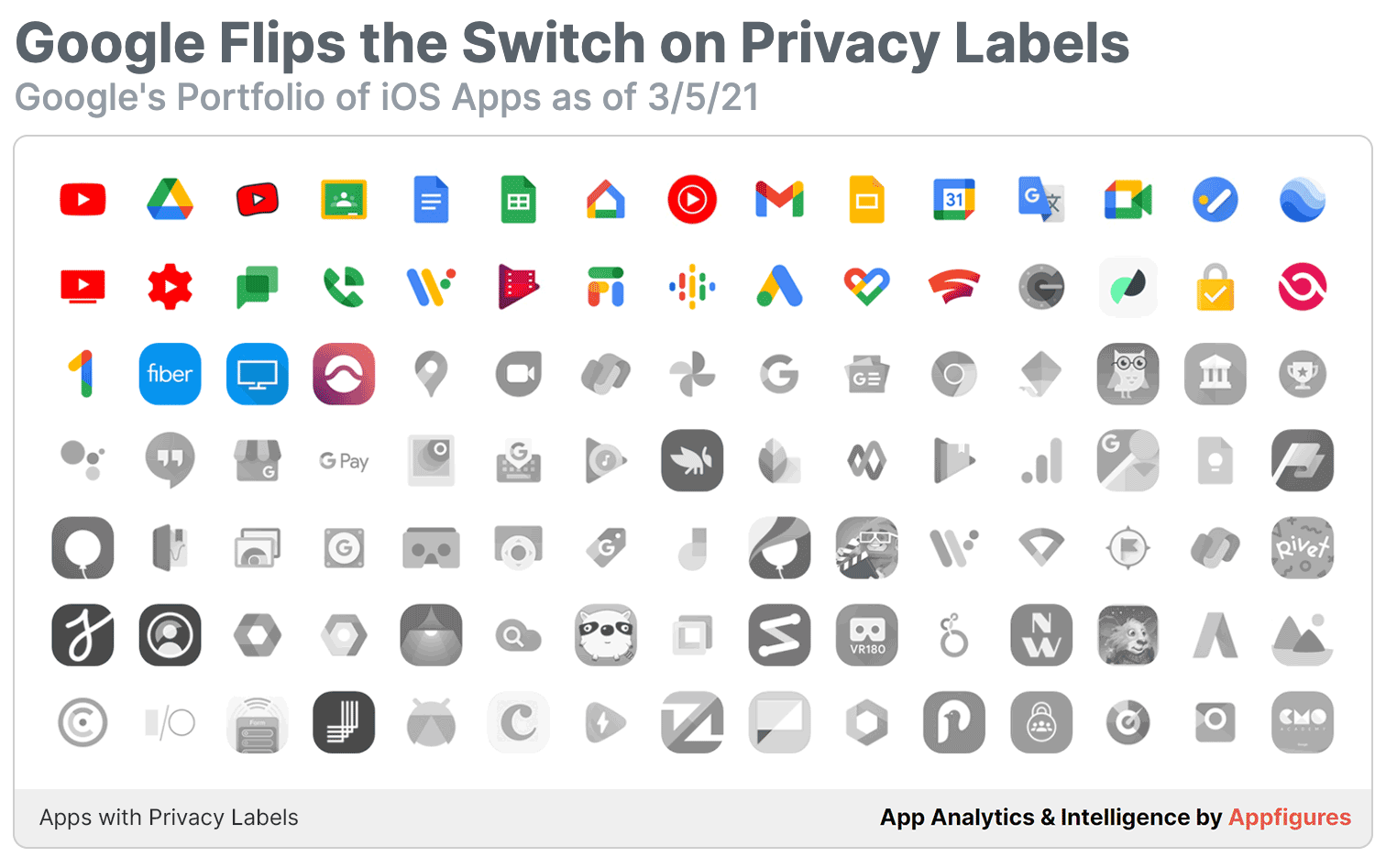 If you know your Google icons well you'll quickly notice that Google started at the top. YouTube, Gmail, Drive, Docs, and Sheets, Google's most popular apps, are now explicit about what they track.

A few big names are missing from this list, namely Maps and Chrome. I wonder if it's because those apps aren't in need of a full update...

What I like here is that unlike Facebook's approach, which was to check every single box for all of their apps, each app from Google has a different set of labels selected.

I think that's a smarter and less selfish move.

This week we compiled our monthly report of the most downloaded games in February. Here's what it looks like by store and overall. 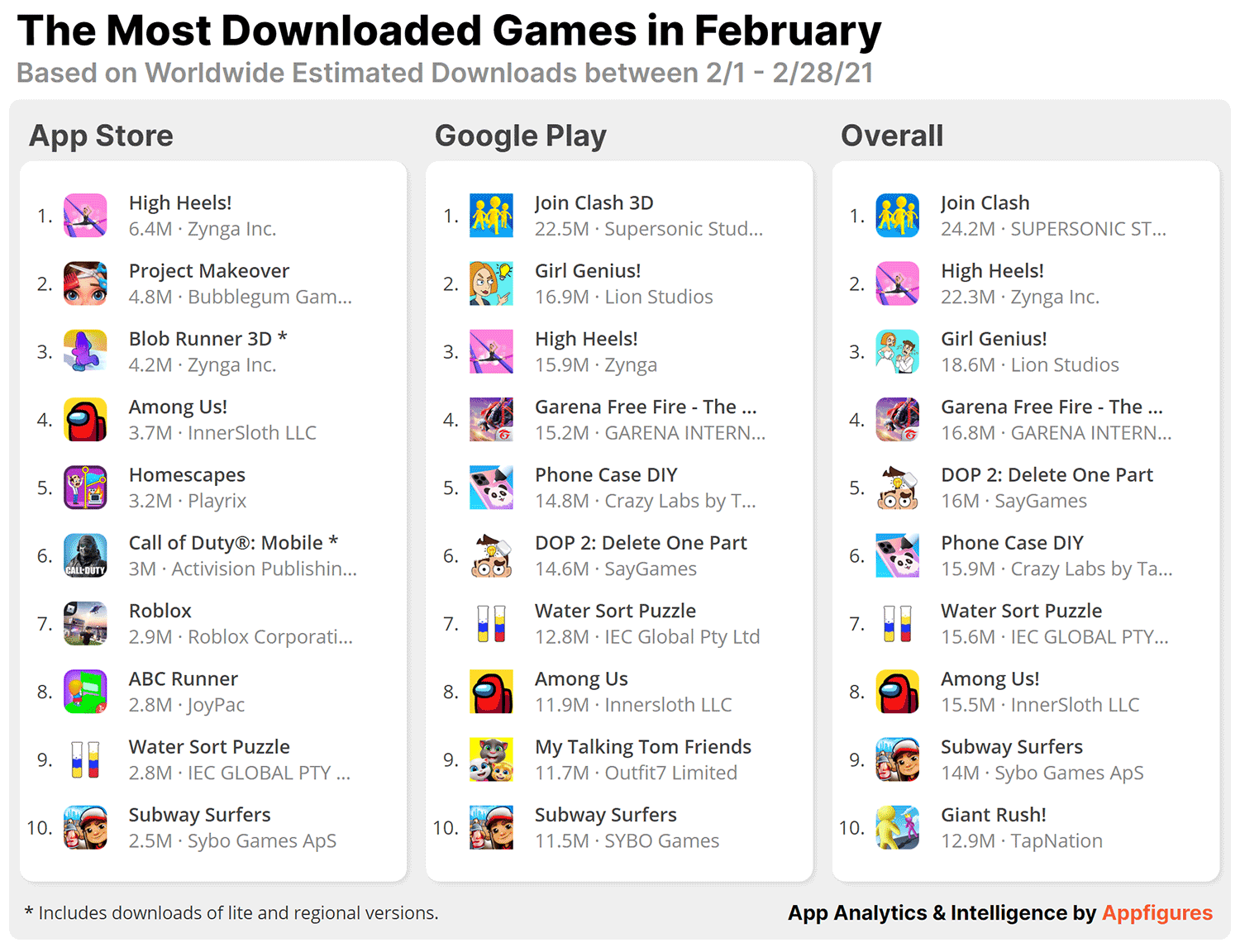 While most names will be familiar if you remember last month's report, Zynga's High Heels! is a new name. The game launched in late January and managed to grab more than 22M downloads globally in February, according to our app intelligence.

February's overall winner, Join Clash 3D from Supersonic Studios, has been inching its way up the charts for the last few months, and with more than 24M estimated downloads in February, it managed to snag the crown from Zynga.

Together, the top 10 most downloaded games in the world were downloaded more than 172M times, based on our estimates.