We released our monthly report of the most downloaded games this week, and just like months before, about half of the top 10 you've seen before, and the other half is the hyper-casual du jour.

This month's report, however, includes a new ranking—By revenue. Looking at the top earners gives us a much different view.

Bursting, aka buying downloads, isn't too hard these days. It's expensive, which is why it's more common to see ad-network-owned "game" studios do it more often.

But, it's not the games that burst that actually make money in the App Store and Google Play. More often than not, they don't use in-app purchases, which is an obvious reason why. Another is that they don't stick around for too long to develop real engagement.

The top earners are, as you may expect if you've been following the newsletter, are the popular names that have built a real brand around their games.

Roblox, Candy Crush, and Clash of Clans were the top earners in the U.S. in April, bringing in a combined $83M in estimated net revenue, meaning after Apple and Google take their cut.

The top 10 games brought in $224M in estimated net revenue in April.

2. Is Clubhouse being spaced out?

Clubhouse had a good great run, rising within a few months from just a handful of downloads to more than 2M downloads in a single week in February. I covered it more than once here because of that.

But I also suspected that this sort of demand just wouldn't hold in the long run, and for a few reasons: 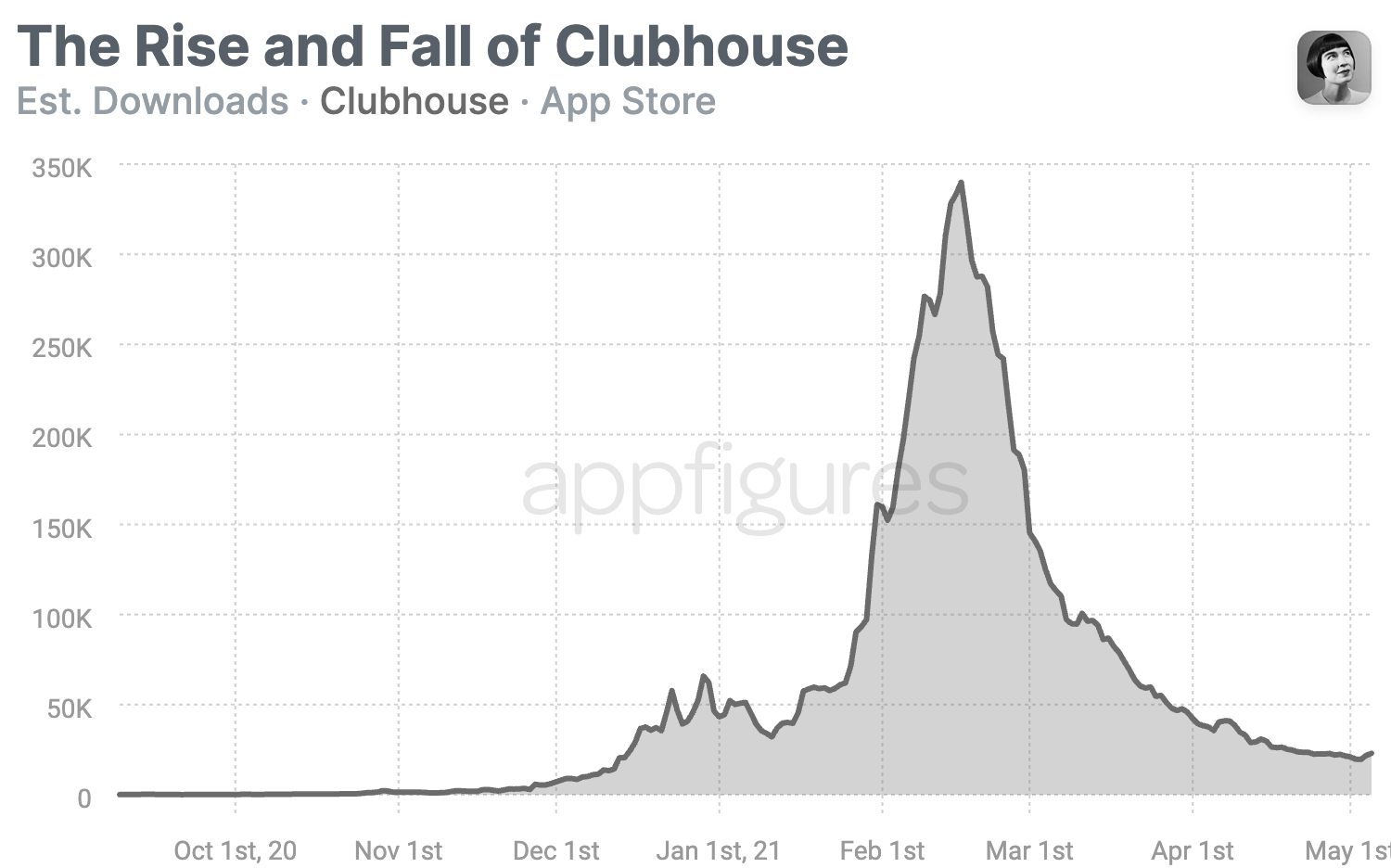 In my mind, the question wasn't whether demand would remain, but rather when it will drop. An analysis of download estimates for the last year shows exactly when that happened.

It happened right after its peak, a trend that's more common with apps that go viral for a minute than apps that earn a place at the top, long-term.

One this that's going for it is it's international adoption. Since the app was released in September, it's been downloaded by more than 13.5 million people worldwide, according to our estimates. The U.S. is by far Clubhouse's largest market with 28.1% of downloads. Japan (7.1%), South Korea (5.1%), Germany (4.7%), and Russia (4.7%) close out the top 5.

Here's the thing: Clubhouse's success was mainly news and FOMO driven, in my opinion. About a half of Clubhouse's downloads, roughly 7M, came during February, where the app commanded the news. It's since dropped considerably, adding 2.6M users in March and then dropping an order of magnitude to just 897K downloads in April.

Why am I bringing Clubhouse up now?

This week Twitter launched its Spaces feature, which looks and feels a lot like Clubhouse but with a twist—Much better discovery. Seeing people I follow on Twitter start talking made me remember my initial thoughts about Clubhouse. The gist is, Clubhouse might be sexy but for it to earn its place among the social media giants it needs a discovery engine. Real-time audio alone can't offer that.

Will Twitter be the future of audio? That's hard to tell, but given the ease of discovery, I think it's much more likely. If you've ever started talking on Clubhouse, you'll probably share my conclusion.

If you looked at the top apps list this week, you'd notice a now-recurring theme, Robinhood and its best pal Coinbase are right at the top of the list. That's because Dogecoin, the crypto no one really heard of until a few weeks ago, is continuing to make unrealistic gains. 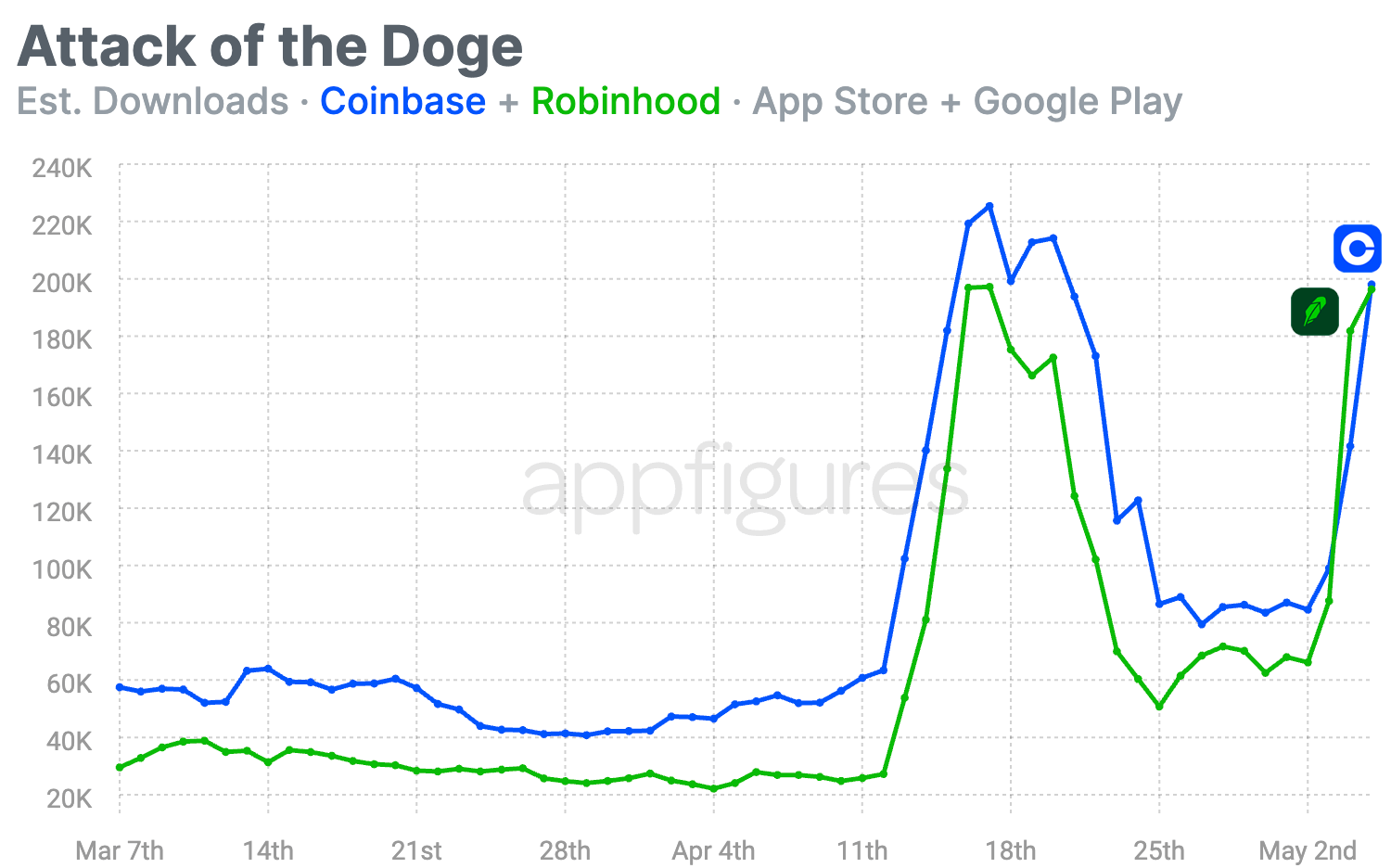 The cryptocurrency that's named after a meme is in lift-off mode, growing 12,900% since January.

This week, Dogecoin caused downloads of Coinbase and Robinhood to nearly double, growing daily downloads to nearly 200K each, according to our estimates. Their downloads were already higher than average by roughly 50% in the last few weeks after the last explosion of Dogecoin in mid-April.

This is important because it indicates the pair is inching ever closer to becoming a household name for buying crypto, a trend I've mentioned last time a cryptocurrency got exciting. Incidentally, that crypto was also Dogecoin.

With common folks looking for a new way to make money, cryptocurrency isn't likely to disappear any time soon, and if Coinbase and Robinhood are the place to buy and sell cryptocurrency, they should pack a bag because they'll be staying at the top for quite a while.

Every week I try to look for signals of things returning to normal, and this week's indicator is downloads of car rental app Turo. Last week, Turo reached the most downloads in a single week since the beginning of 2020. 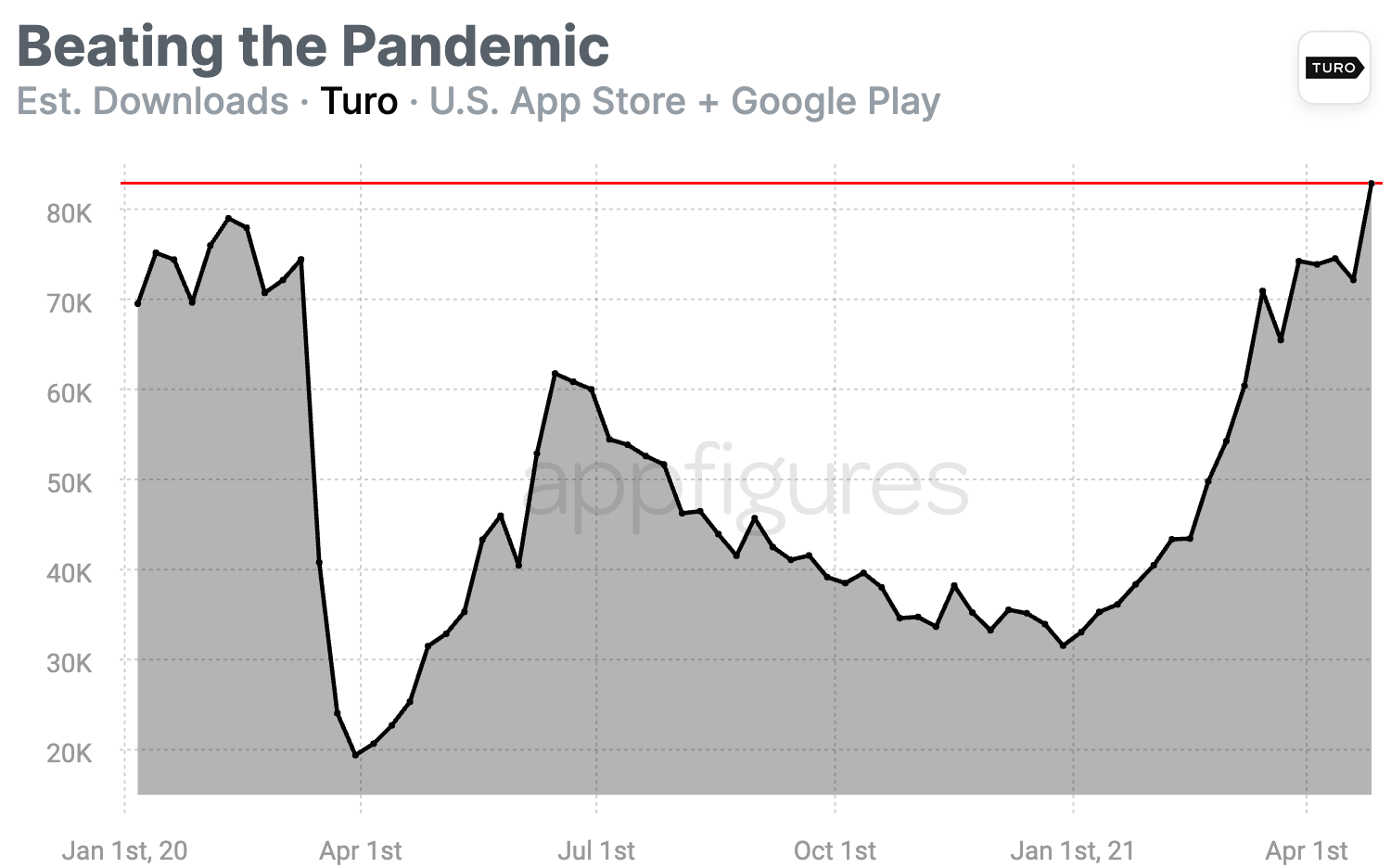 Turo's car rental app, which pairs car owners with those who need a short term ride, much like Airbnb, ended the week of 4/26 with 83K downloads, more than 10K downloads higher than the previous week, and more than 60K downloads more than their worst pandemic week in April of 2020, according to our estimates.

It's also roughly 4K downloads higher than the best week of downloads in 2020, which was February 10th, according to our intelligence.

This could be a result of an aggressive ad campaign, but for ads to work, there needs to be demand, and the demand is there now.

5. The best way to get new users

Ending on a warm note, this week McDonald's ran a promotion that gives a free McFlurry for downloading its app. Ice cream for downloads isn't a new strategy, but it continues to yield results.

Downloads more than tripled on Tuesday, the day of the campaign, to more than 111K, according to our estimates. Although the campaign was only for Tuesday, downloads remained high on Wednesday, with 90K estimated downloads.

Companies like McDonald's have relied on good old giveaways for user acquisition for a long time. With the fear of going out subsiding, the strategy continues to show its effectiveness. I expect to see more of those as we head into the summer, from McDonald's, its competitors, and other companies who have something attractive to offer.

Bottom line: At around $2 retail (and probably a tenth cost), this is a relatively inexpensive way to get more users and has a few potential upsides. The first is more users they can then push notifications to. The second is more potential users who will allow tracking, because they're indirectly incentivized with a gift.

Having people walk into their locations also increases the chances of those people buying something else, so this could earn more than just downloads.