Microsoft wants to buy Discord, the chat service gamers love, for a record $10B. That's a big chunk of change for a messenger. 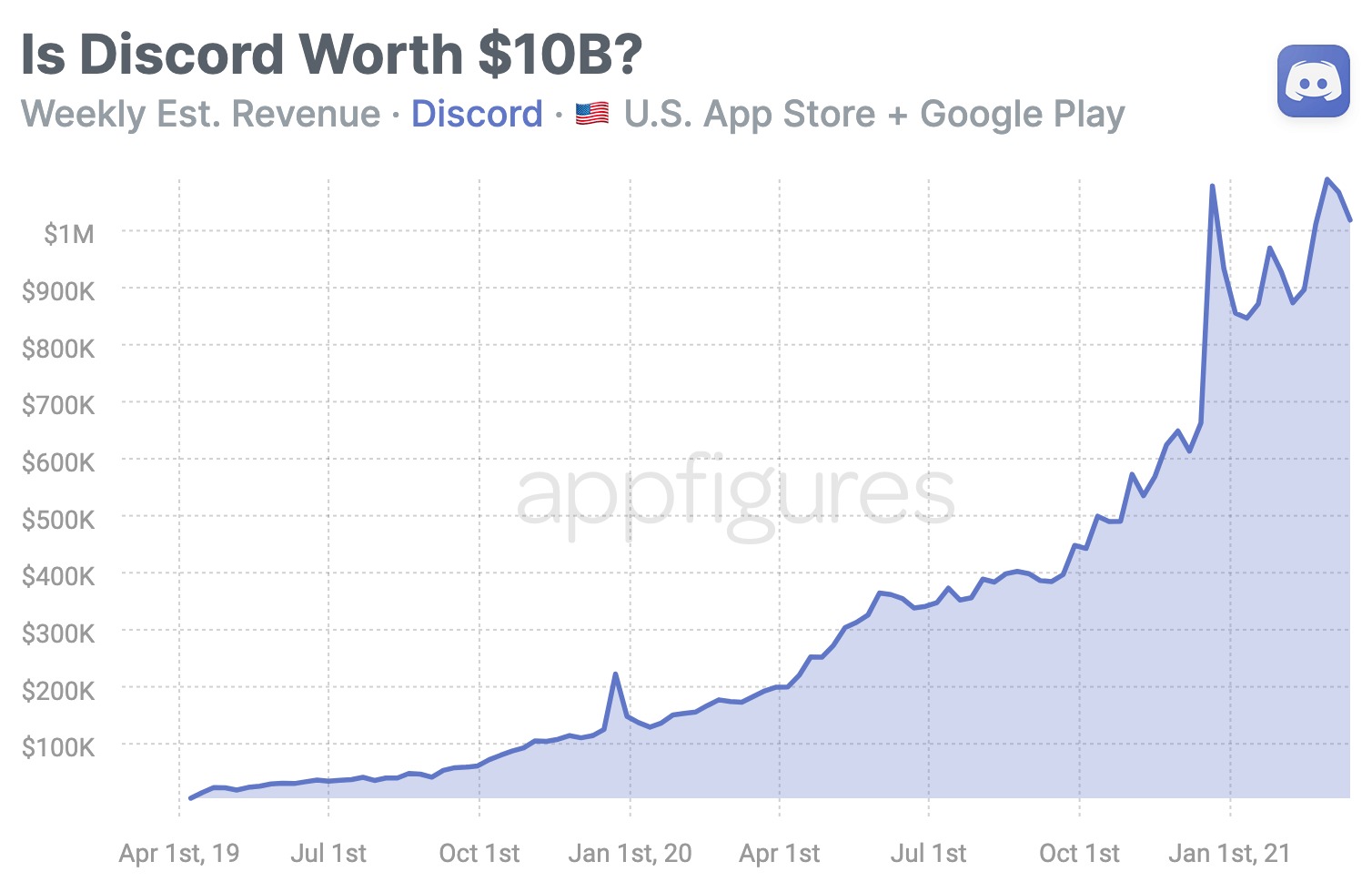 Looking at our revenue estimates, we can quickly see why—Revenue growth.

In the last two years, since Discord turned on in-app payments, weekly revenue in the U.S. grew from a few thousand to more than $1M of net revenue (~$1.4M of gross revenue).

Bottom line: This could be a massive payday for Discord, but even if Microsoft doesn't end up acquiring it, such revenue growth can easily lead to an IPO.

Slack, the business messaging app that Salesforce recently acquired, is now letting anyone send direct messages to anyone if they know their email.

If I had to guess, I'd say this move targets the enterprise, where cross-company communication is usually a much bigger headache than it is in smaller companies and startups. Enterprise is also an area Salesforce knows very well.

But is it already too late for Slack?

I ask that because Slack competes with Microsoft Teams. While the products look similar, Teams has the advantage of being available in the Office bundle.

In 2018, Slack's downloads outpaced Microsoft's 3 to 1, but that all changed towards the end of 2019 when Teams started outpacing Slack 2 to 1. In 2020, thanks to a global shift to work from home, things changed drastically.

We estimate that weekly downloads of Microsoft Teams hit a peak of 6M globally as the workforce shifted to working from home in March. Downloads stayed high ever since, and even though that astronomical number has gone down since, it hasn't gone down by much. A year in, Teams is still averaging 3M downloads a week.

Slack's 2020 wasn't as exciting. Downloads spiked right around the same time, but only to 410K, and only for a single week. They've gone back right away to the pre-covid average of 100K.

That means Teams is beating Slack by an order of magnitude.

Bottom line: Teams has been getting a lot of downloads in the last year, but Slack isn't tiny either. Is this change enough to keep that audience from leaving and going to Teams? As a Slack user, I'd love to see real product improvements like better threads and more stable video chat. But that's just me. Overall, I think Slack needs to go back to its roots, which is product, to remain competitive.

I'm curious, which team are you on? Did you switch recently?

Ad network AppLovin is IPOing, and while we don't normally look at services, AppLovin is an interesting case because in addition to its ad network, AppLovin also operates a game studio, and thanks to the recent acquisition of Adjust, they're also in the attribution business.

According to our Top SDK charts, AppLovin ranks 4th and 5th by installs across iOS and Android apps, respectively. While it's not a threat to Google, the category leader, it's getting very close to Facebook. That's something!

Let's take a closer look at the numbers:

There are 94K apps and games, mostly games, that monetize with AppLovin. Those include games from studios such as Halfbrick, Voodoo, Smule, Outfit 7, and Gameloft.

AppLovin's game studio, Lion Studios, has released 267 games to the App Store and Google Play, including the #3 most downloaded game in February, Girl Genius.

Adjust's attribution SDK is installed in 23K apps and games, including PUBG, Crash Royale, Pokémon Go, and even Spotify.

My take: AppLovin's numbers are solid, and on the surface, has a diversified portfolio. I say that because the game studio is largely supported by free ads on AppLovin's network, and an ad network also being responsible for attribution leads to questions about bias, but those shouldn't take away from the impressive ad network. The thing is, ads and attribution aren't sexy to investors, so AppLovin's IPO will be more about the hard numbers than about a sexy name.

Money is the theme this week, so we have to look at another hot category: dating.

Pandemic or not, people don't want to be alone, and dating apps have been the answer for the last year. One app, in particular, has seen amazing revenue growth. 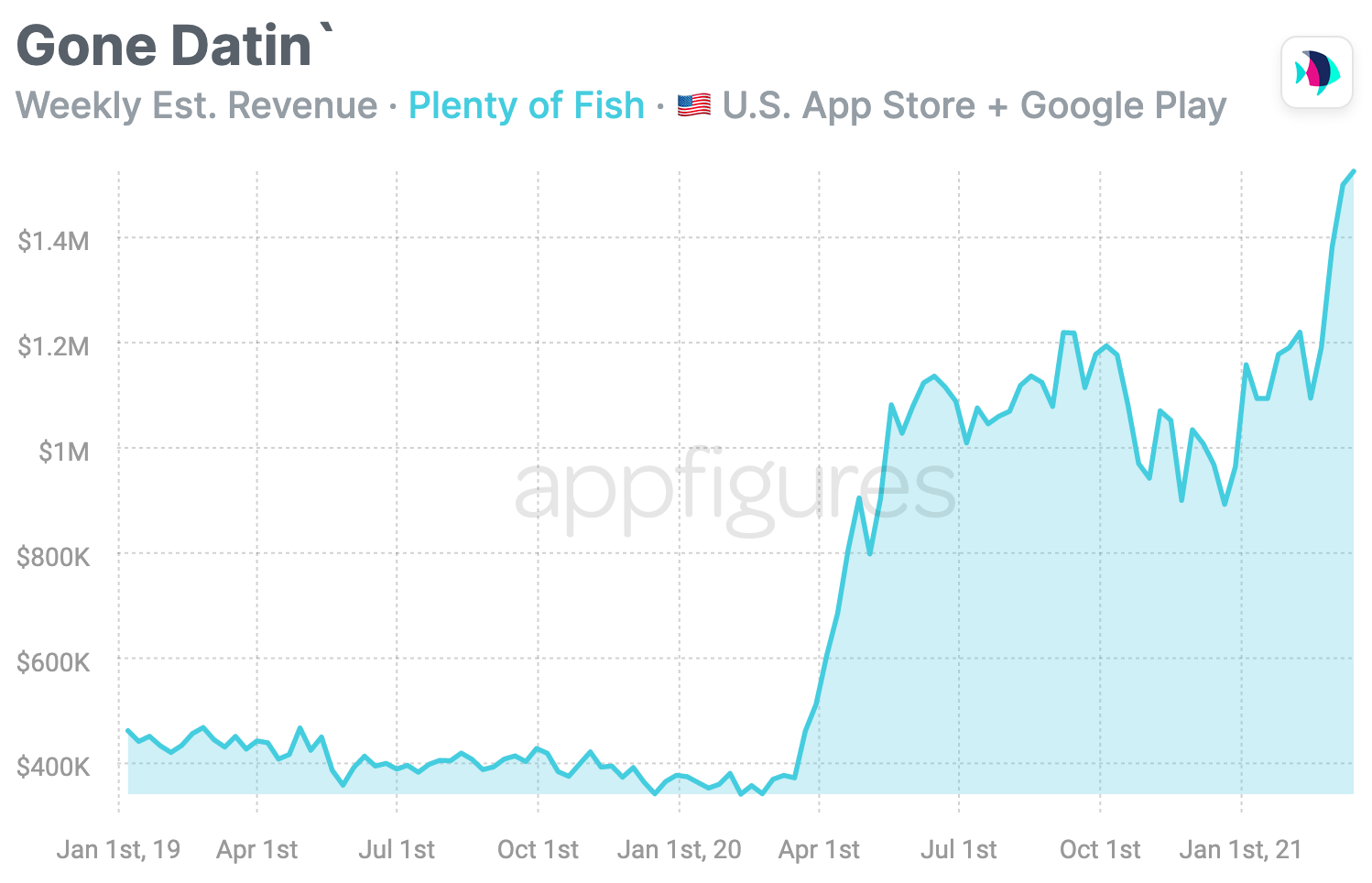 According to our estimate, weekly net revenue in the U.S., which was roughly $400K in 2019, doubled to around $1M last April, and again last week, when Plenty of Fish reached $1.5M (~2.1M gross) in weekly net revenue.

With this growth, Plenty of Fish eclipsed Hinge, another dating app that has similar revenue. While there's a long way to go before it can challenge category leader Tinder, 3x growth is incredible.

Interesting: Weekly Downloads did not grow at all over the same period, so this revenue growth is more about converting existing free users into paying ones, a powerful move that has a lower cost than acquiring new users.

I like ending the recap on a positive note, and this week the positivity comes from Lyft, which could be used as a proxy for social mobility. 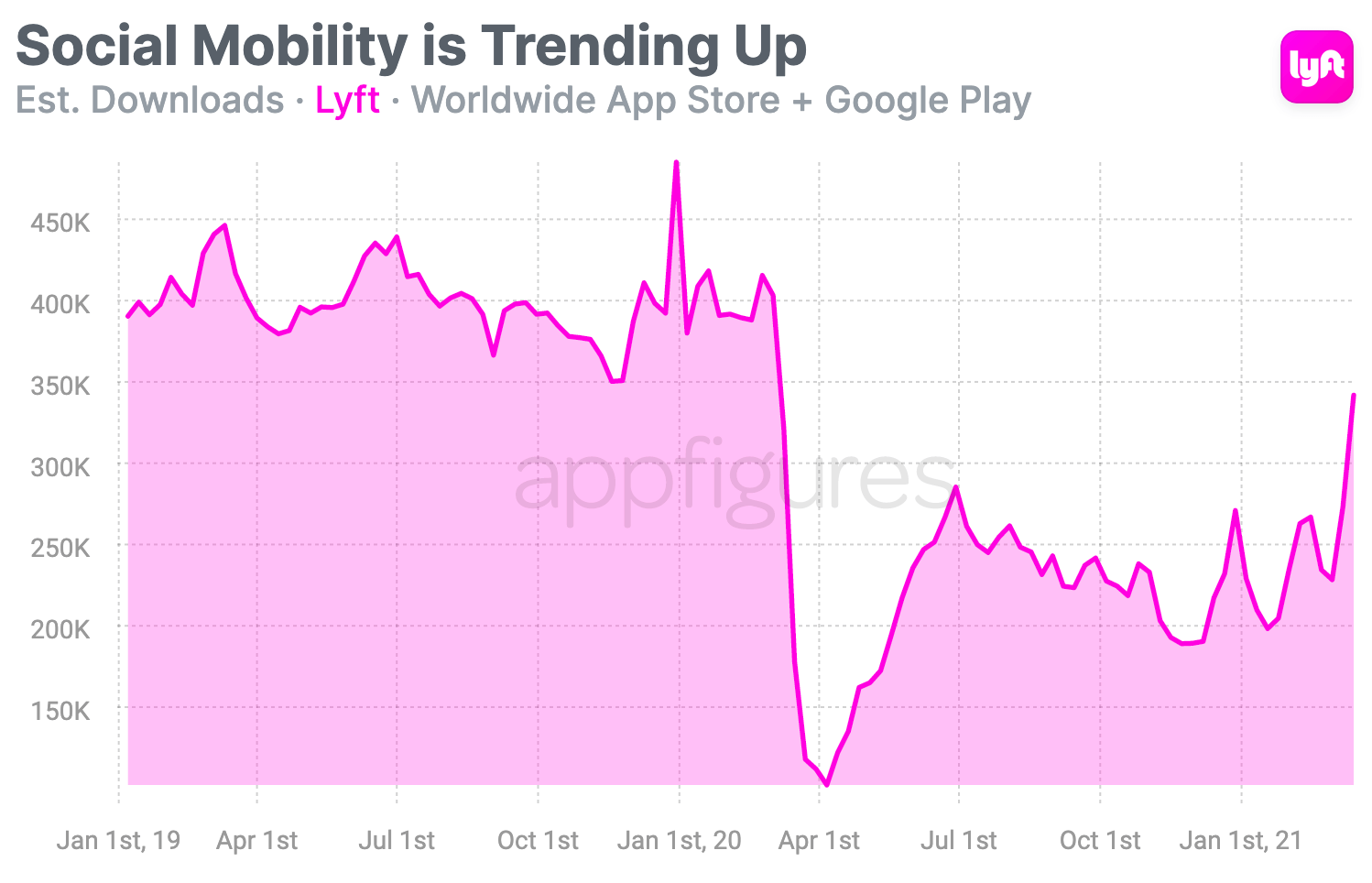 Last week, downloads hit a post-covid all-time high with 341K downloads for the week globally. This number beats previous highs on New Year's Eve and valentine's Day. Those averaged 270K each, according to our estimates.

Looking at pre-covid downloads, it's obvious we're not out of the woods just yet, but we're getting very close. Between social places reopening or growing capacity, more vaccinations, and the weather, I expect this number to recover fairly quickly and surge even higher this summer.

This Week in Apps #63 - The Streaming Wars Continue

This week we look at how Poparazzi became the most downloaded app in the US, Amazon's strategy, and the future of mobility (hint: micro).